Several thousand Kashmiris will be voting in a historic and much awaited referendum, this week.

That vote will determine whether a region with a distinct identity can successfully secede from a much larger nation.

Their ballots will be cast, however, in Glasgow – not in Srinagar or Jammu.

Of the 20,000 or more people of Pakistani origin living in Glasgow, many are from Pakistan-administered Kashmir.

In Kashmir, the first pledge that people there would determine their future by a plebiscite or referendum was made in 1947. At that time, the Scottish National Party (SNP) was in its infancy. It had no members of parliament and any talk of Scotland’s independence would have been regarded as fanciful.

Almost 70 years later, where are we now?

The pro-independence SNP is in power in Scotland’s devolved government and has achieved the landmark success of negotiating with the UK government this binding referendum. The opinion polls suggest the outcome is going to be close.

In Kashmir, however, while demands for a referendum persist, the chances of it happening are remote. 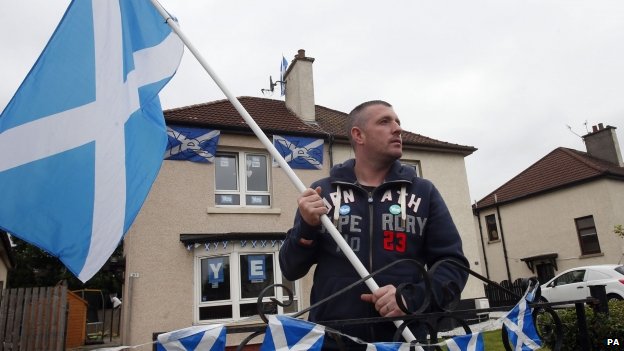 Kashmir, long denied its own independence vote, will be watching Scotland’s referendum

The Scottish government, in its document setting out the case for independence from the UK, asserts that of new states which have become UN members since World War Two, 30 achieved independence after a referendum.

Many of these referendums have followed wars, or separatist insurgencies. In Scotland’s case, of course, there has been no resort to arms, no threat of force.

Much smaller states than Kashmir have become independent after a referendum – East Timor, for example. And there are other regions where a referendum has been talked about, and indeed endorsed by the UN, but not happened, such as Western Sahara.

So how did Kashmir come to be promised a vote on its future, and why didn’t it happen?

Kashmir’s modern history is both complex and deeply contested. But in a nutshell…

When the British governed India, the region of Jammu and Kashmir was ruled by its own maharajah. In 1947, when British India was divided into the independent states of India and Pakistan, Kashmir’s maharajah – a Hindu ruling a mainly Muslim population – ducked deciding which state to join, hoping he may be able to become independent.

An invasion by armed tribesmen from Pakistan forced the maharajah’s hand. He joined India, which sent troops to save his capital from ransack and managed to secure control over most, but not all, of the princely state. Indian troops have been there ever since.

When Lord Mountbatten, India’s first Governor-General, accepted Kashmir’s accession, he said it should eventually be "settled by a reference to the people". India’s Prime Minister, Jawaharlal Nehru, also pledged a plebiscite or referendum for Kashmir under international auspices. This was later enshrined in UN Security Council resolutions.

The leading Kashmiri nationalist of that era, Sheikh Abdullah, initially supported Indian rule, and wasn’t keen on a referendum. Over time, he came to argue that there should be a vote… while Nehru became determined not to hold one, because it meant endangering India’s hold on the region.

Omar Abdullah, Sheikh Abdullah’s grandson, is currently the chief minister of the Indian state of Jammu & Kashmir. He supports Indian rule and won an election to achieve office. India says that shows Kashmiris have endorsed being part of India at the ballot box.

But Kashmiri separatists don’t contest Indian elections and they argue voters choosing between a range of pro-India parties are not endorsing the principle of Indian rule.

If there was a referendum in Kashmir, what would the outcome be? 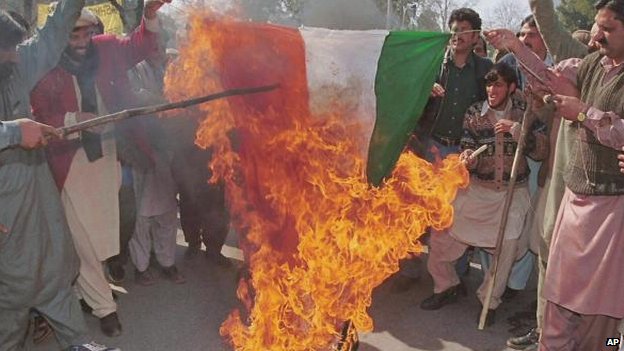 Over the years, pro-Kashmir supporters have protested against Indian rule but it’s not clear, given the chance, how many people would vote for independence

Twenty-five years of separatist insurgency in Indian-administered Kashmir, and the Indian response to it, have claimed tens of thousands of lives. They have also created a climate where people are often reluctant to say what they really feel.

Earlier in the year when I was in the Kashmir valley – the heartland of Kashmiri culture and identity – a reliable political commentator told me there was considerably more support for Pakistan than for India, and much more backing for independence than for either country.

But there are two points to bear in mind: the referendum the UN envisages would not give the option of an independent Kashmir, only of accession to India or Pakistan; and it would cover the whole of the former princely state, of which the Kashmir valley constitutes less than half the total population and under a tenth of the area.

There’s much less support for independence in the part of Kashmir under Pakistan’s control and in Hindu majority Jammu on the Indian side of the line.

So, as I said, it’s complicated.

But will Scotland’s vote make any difference to Kashmir?

The pro-independence Jammu & Kashmir Liberation Front has already pointed to the Scottish referendum as an example India should follow in Kashmir.

When Kashmir has begun to recover from the recent devastating floods, and the political dust has settled in Scotland, observers in Srinagar will be keen to learn the lessons from this week’s independence referendum.

And while there are many and profound differences between Scotland and Kashmir, if there is an independent Scotland then the example of a small part of a powerful state breaking away will be much talked about.

And Kashmiri separatists, who are often told that their region is too small for independence, will point out that Scotland’s population is almost exactly the same as that of the Kashmir valley.

Candle Light Vigil During Prime Minister Modi’s Meeting with President Obama
Man behind the disaster, before and after