India’s response to an uprising in Kashmir has been, by turns, repressive and complacent. It is storing up trouble for the future 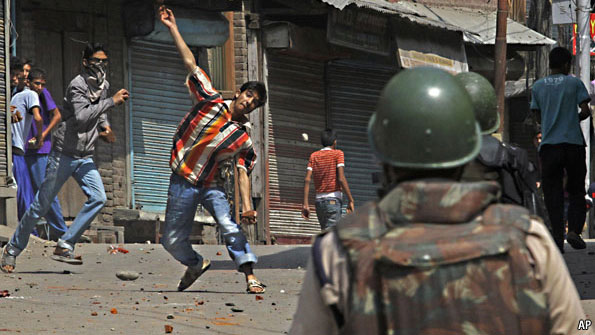 A GROUP of special Indian police barged into a white-painted, single-storey house on the crisp morning of October 27th. They let their lathis do the talking. The wooden batons were first rammed through all the windows, furniture and a television. When the grey-haired owners protested, the rods were turned on them. The police broke the husband’s leg and beat his wife’s flesh a sickly purple. Before leaving, the officers added an insult, hurling religious books, including a Koran, to the floor.

Such intrusions are common in Palhallan, a hillside settlement in the north of Indian-run Kashmir. It looks like an idyllic rural spot, where bushels of red chilies hang from the eves of steep-roofed wooden houses and hay wains jostle with shepherds in narrow streets. But the village has been caught up in months of violent protests that have roiled Kashmir. In 2010 an uprising led by youthful Kashmiri separatists left over 110 people dead and thousands injured. Youngsters daub anti-India slogans on walls, yell at Indian police and soldiers to “go home”, and hurl stones.

In turn its residents have taken a beating. A young man lifts his hand to his head, showing a zip-like scar running from the crown of his skull to his neck. It is the result, he says, of a police battering. His lament is typical: “I am an unpolitical person, but they treat me like a terrorist.” Locals say they suffer collective punishment. Enraged officers usually fail to catch stone-lobbers, so lash out instead at families and residents nearby, accusing them, usually unfairly, of collusion.

As a military helicopter buzzes overhead, a resident counts eight people killed and many more hurt in the area in the previous three months. Bitterness deepens with each injury and funeral. “The police,” he says, “they want to start a war.” A return to war, or widespread armed insurgency, is unlikely for the moment. But fury has spread, spurring some young Kashmiris to demand a more violent, more bloody response than mere strikes and stones.

On November 10th three men in Pattan, a small town a few minutes’ drive down the hill from Palhallan, took matters into their own hands. Hidden in the crowd of a bustling market they marched up to a pair of police constables, shot them at close range, snatched their rifles and fled. Both the policemen died. The Kashmiris have aped Palestinian methods, mobbing India’s ill-trained, sometimes panicky, police, by raining stones and broken bricks on them.

The police—more in the habit of using sticks and bamboo shields—have struggled, fighting back with huge quantities of tear-gas (tens of thousands of canisters were fired in 2010) and then bullets. They have reckoned that any protesters who die have themselves to blame. Officials in Delhi bristle at any comparison between the year’s events and Bloody Sunday in Northern Ireland or the unrest in neighbouring Tibet. Kashmiris, they insist, have their own land and state, enjoy religious freedom, are by no means the poorest in India and take part in elections, most notably in 2008.

But there are severe limits to their democracy. Peaceful protests are prevented, jails are crammed with political detainees, detention without charge is common, phones are partially blocked, the press censored and reporters beaten, broadcasters muffled and curfews imposed. Those who complain too fiercely online are locked away. The authorities in Kashmir and Delhi say these measures are temporary. They say that to prevent abuses, the police are now being trained and re-equipped. (Soldiers, for the most part, have been kept away from street clashes.) Omar Abdullah, the chief minister of Kashmir, says that police officers may even be prosecuted for misdeeds. But the repression persists, and risks causing ever greater resentment and instability.

Seen from Delhi the uprising appears manageable. Kashmiris have dropped their guns and shooed away Islamic insurgents who a decade or so ago skulked in the postcard-perfect mountains. The presence of a 350,000-strong Indian security force (some say the number is much higher), amid a population of just 11m, has also kept the armed militants at bay.

It helps India that Pakistan, the eternal trouble-stirrer in Kashmir, is in disarray. And India takes heart from the weakness and fractiousness of local leaders in Srinagar. Many have been bought off with well-paid posts, or jailed, or both. Moderates who attempt to reunite the parts have been locked up or worse (one was shot and paralysed by a mystery assailant). Some of the highest-profile ones, such as the stone-pelters’ elderly icon, Syed Ali Shah Geelani, are kept under house-arrest.

Some Kashmiris darkly hint of picking up guns again, but the local leaders have no appetite for large-scale violence, fearful of a return to the carnage of the 1990s when thousands died each year. Instead they encourage low-casualty options such as throwing stones and prolonged stay-at-homes (hartals).

If such gestures have a goal, it is to gain attention. Young Kashmiris expose themselves to Indian bullets, hoping to draw compassionate outsiders—Barack Obama perhaps—to put pressure on India. Yet the strategy has so far achieved little. Outsiders, especially Western democracies once so cocksure and outspoken on human rights, now fret that their power is ebbing eastward. The Kashmiri separatists who suggest that “you people” or “Britain and America” could somehow chide India into a less repressive stance in Kashmir do not appreciate how eager Westerners are to court India as an ally.

The Kashmiris who have died in recent months have at least embarrassed India, which may yet respond by moderating the repression. But the radical separatists, who define azadi, the Kashmiri word for freedom, as outright independence from India—or even, for a shrinking number, incorporation with Pakistan—will not be placated. And nor will India consider letting Kashmir go.

Time appears to be on India’s side. With each passing year it will have more resources to throw north. The local economy, at least until recently, had been chugging along quite well, thanks to horticulture, tourism, funds from central India and heavy spending by the armed forces. A few Kashmiri expats had started returning and investing before the uprising in 2010. Development in itself will not fix Kashmir. But faster economic growth could at least prove a useful balm.

The government has made some political gestures. In September, an all-party delegation of Indian politicians—including even the Hindu-nationalist Bharatiya Janata Party—visited Kashmir. India’s prime minister, Manmohan Singh, made reassuring comments about addressing grievances there. The government in Delhi also pledged to send a high-ranking team of interlocutors to prepare a series of reports on Kashmir after consulting all sides in the conflict. A three-person team was eventually named in October.

These initiatives have started to persuade some in Kashmir of progress. But the team is made up merely of two academics and a journalist, people who carry no political weight. Nor does it help that they have already fallen into public squabbling. Kashmiris have watched their saga wearily. Some leaders have refused to meet the delegates, dismissing them as a joke.

Conspiracy theorists in Srinagar, the capital of Indian-controlled Kashmir, accuse India’s generals of sabotaging politicians’ peace efforts because the armed forces reap big rewards in the territory. More likely the central government in Delhi, run by the Congress party, is shy of Indian nationalists, who complain whenever concessions are considered for Kashmir. In October, a writer, Arundhati Roy, suggested Kashmiris might have legitimate complaints, and that Pakistan might have a justifiable interest in Kashmir. Hindu nationalists demanded she be tried for sedition.

So Kashmir is left to smoulder, with dire consequences for its citizens. A visit to Srinagar’s psychiatric hospital shows throngs of patients, crowding around its overworked chief consultant. They relate a dismal roll-call of anxiety, stress, depression, alcohol and opiate addictions, child abuse and suicides. As Dr Mushtaq Margoob takes a break to munch a chapati and sip milky tea, he talks of Kashmir as a broken society. Some patients become destructive, he says, describing a mother who watched her son shot dead on the street and who then went on to burn down her own home and that of her neighbours.

The most damaged, he concludes, are the youngest. “We see a collective anger, an aggressive, traumatised generation”, he says. The head of a think-tank talks of 600,000 young, educated, Kashmiri adults who are now jobless, waiting for some sort of guidance. Religious and political leaders fret that their youngest followers, teenagers, excited by the stone-pelters, are increasingly attracted by more radical ideas.

Worryingly, the youngsters talk openly of religious antagonism. Some ask why Kashmir’s Muslims do not turn on Hindus (many Hindu pilgrims visit a sacred spot in the state, but have so far been left unmolested) to seek communal revenge for repression. The head of a student movement, a man who has spent most of his adult life in prison and who is now on the run and hiding from police in the backstreets of Srinagar, warns of infuriated youngsters turning to a “battle of extinction” in which “others, not only Kashmiris, will be killed”.

As long as political leaders exist to channel, and moderate, the rage of the stone-pelters and innocent victims, such excited talk might be discounted. Mr Geelani, a frail octogenarian, is one such. He condemns India as “an occupying imperialist power”, but he is largely a moderating influence. He opposes any return to arms. He supports the pelters’ goals, but not their methods. His practical demands, for the repeal of draconian laws, the end of police abuse and talks with the central government, are hardly off the wall. 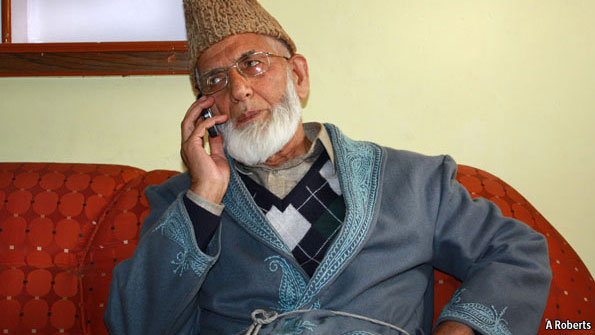 Geelani awaits the call from Delhi

But Mr Geelani’s influence is waning, along with his health. It is doubtful that anyone among a handful of potential successors could command as much local respect. The alternative could be more troubling. Some observers fear that as India succeeds in neutering Kashmir’s nationalist politicians, religious groups will flourish.

A Wahhabi welfare organisation, al Hadith, which almost certainly benefits from generous Saudi funds, is quietly emerging as a powerful welfare, religious and cultural force. As others bicker, it has gone about building community centres, mosques, primary and secondary schools and clinics. It is seeking permission to set up a university. Its genial leaders deny being extremists, pointing to their love of education and computers; they say that in the planned university, women and non-Muslims will be enrolled too.

As for claims that the group, which says it has 1.5m members, is spreading conservative values in a territory long known for its Muslims’ religious tolerance, one leader concedes only a “little, little component of cultural shifting”. A few more women are wearing burqas, or staying at home, than did in the past. More Arab-style mosques are springing up.

The non-Muslim minority in Kashmir is much less sanguine, seeing al Hadith as a proxy for Saudi interests and a powerful example of the spreading “pan-Islamisation” of Kashmir. They fret that ties may exist to Wahhabis elsewhere, including terrorists, and warn that a powerful new force is rising in the territory, filling a vacuum created by India. Just now their concerns seem overblown. But the government in Delhi would be wrong to think of Kashmir as yesterday’s problem.

On 75th anniversary, PM reminds UN of its unimplemented resolutions on Kashmir

Press in Kashmir – a dark void in World’s largest Democracy

In the line of fire
Need for a roadmap